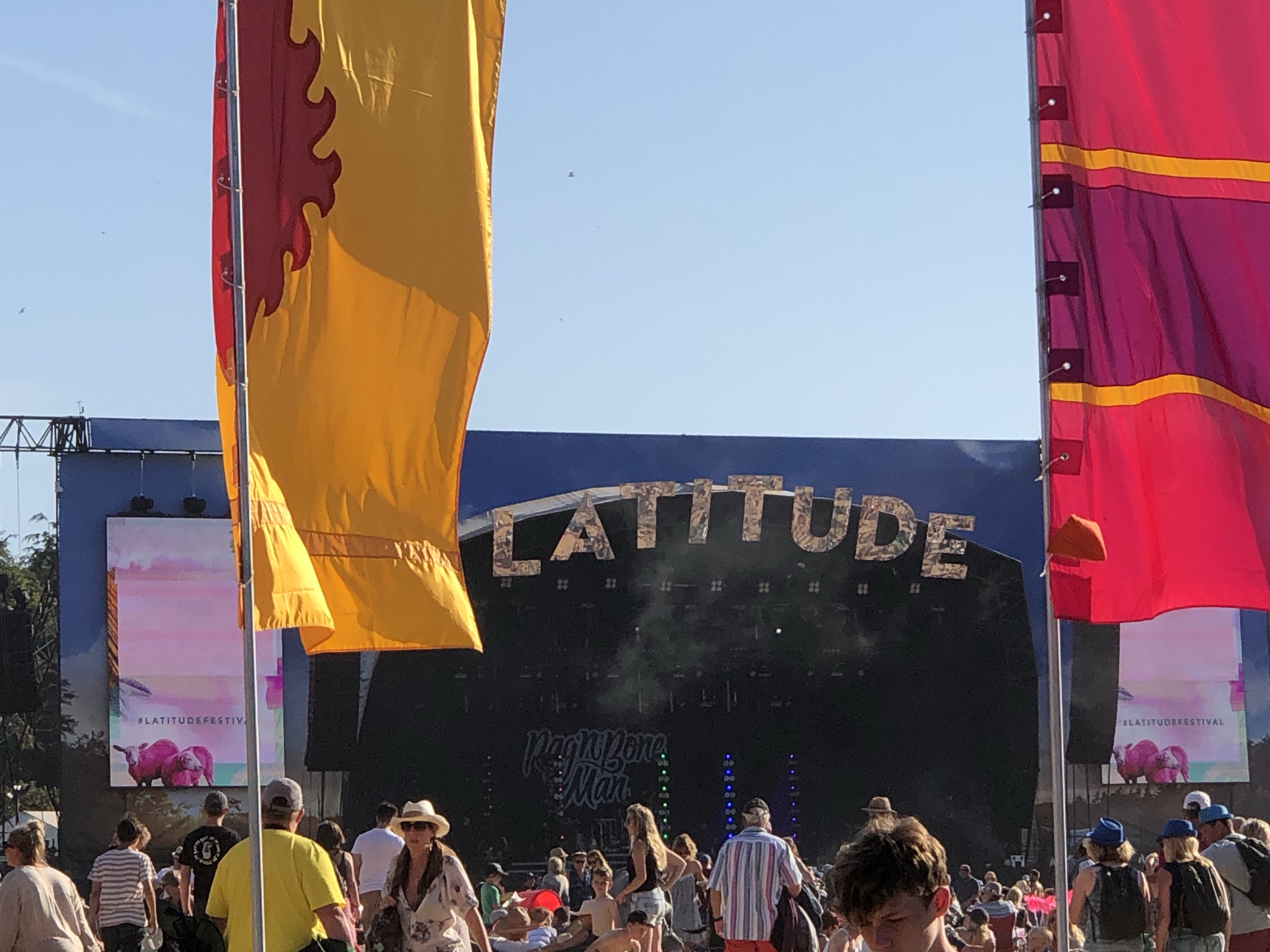 So its late on day two, dear reader, very late. I woke up late; was fed a grand cooked breakfast by our camp cooks, the ‘Sasha and Digweed’ (Jon and Sarah) of campsite cooking; slowly got dressed and did all the usual camping ablutions and slowly meandered towards the area. Headed in for about 16:00 hrs. Oops. A day wasted? Hardly, Latitude, in all its glory, will keep me occupied until well into this evening. The rest of the gang had headed off shortly before me, but I really can’t bring myself to operate on anyone else’s timeline when I’m this relaxed. The body is probably willing but the brain just won’t allow it.

Anyhoo, I’ve found them all and we are chilling back in the Obelisk filed/arena between Parquet Courts (ok) and Jesse Ware (bound to be fabulous), before tonight’s headline act; The Killers. Ooh, Jesse has just begun. Temporary pause for my entertainment…

Ahh, fabulous. What a great act. She’s doing her podcast tomorrow, which she does with her mum, in the Speakeasy too. They’ll be interviewing Adam Buxton, which should be fun and funny.

But that’s tomorrow. I was going to tell you about yesterday, so I shall. Because this is my blog and I can do anything I like. Suck it up buttercup.

So I left you yesterday at some point in the afternoon. I can’t be arsed checking when so hopefully there’s no duplicate of that post here. I met the gang at their gin cocktail lesson and declined to join in because gin is the devils own urine and shall never pass my lips, fashionable or not. It’s one of my few red lines! I had some scotch eggs (one traditional, one with chorizo) and some sweet potato fries instead. Yum. Obvs.

After they’d finished we spent a hilarious half an hour or so being entertained by Rachel Parris, with highlights which included her song ‘Hen do on a train‘, not Hindu. She’s no racist! As well as stories of how she fears and hates her godson. Harsh but humorous. Thence to the main stage again for The Charlatans and ‘that’ hairdo. It’s always great when you hear a song you love live, in this case, for me it’s Weirdo. A great tune. After them, I stayed in the arena to snooze through Belle and Sebastian. I can take them or leave them personally, but that’s the beauty of festivals. Some you like, some your pals like. Some you all like. Most importantly you can just relax and let life wash over and around you. The group were quite taken by a little toddler who had a rainbow hat on and matching leggings. They were especially pleased when said toddler apparently laughed ‘at’ me when I tried to get up for the horizontal snoozing position. Apparently, a fat weeble in slow motion is toddler chuckle gold! Cute. But cruel.

And so to dinner, in my case the worlds spiciest jerk chicken wrap (that’ll hurt on the way out!), for others a curry and others different food still. Then we split. Some of the group off to the BBC Music tent to see James, which they enjoyed. I took a pass on that on account of having seen them before when the lead singer forgot the words to his own song (dick). So I stayed in the Obelisk for Solange (managed to get so close shots as you can see above). Now, I have to say I’d heard the name but had no idea why and really didn’t know what to expect. A passing festival goer over dinner informed me that she was a ‘poor mans Beyonce’, which frankly left me none the wiser, but I can only assume that Beyoncé live is some kind of living God, because the Solange set was most excellent indeed. I’ll have to add her to my Spotify playlist. I love a good brassy groove and from my, admittedly tiddly, memory there was certainly a lot of that. And who doesn’t like a large brass section? If you don’t, I’m afraid to say I respect you a little less. Just a little mind you. Each to their own and all that.

Well what does a tubby old chap do after the headline act at a festival do then, I hear you ask? You did ask, right? I’ll tell you. He meets up with the rest of his chums for Guilty Pleasures. Supplementary question, I again hear you ask. Bloody hell, alright with the questions already! Guilty Pleasures is a DJ-led evening of all the classic hits you really shouldn’t admit to liking. A place where to quote the programme, ‘Beyoncé downs shots with Whitney Houston, while Madonna doesn’t stop moving to the funky beat with S Club 7 and Katy Perry loses her shit over the fact that Backstreet is back, alright?’ All accompanied by a cabaret dance troupe whose name escapes me and in this year’s case and all female Bruce Springsteen tribute act called The She Street Band. A real wave your hands in the air like you just don’t care sort of night. And I was shocked at how many songs I shouted “Chooooon” at when I heard them start only to realise it was some torrid shit from Justin Timberlake or ABBA. Well balanced with some proper rock classics too, this was a great night out and a great way to end day one.

Additional events from the day included not being arsed to do the walk from campsite to arena so getting the Charity Concierge to take me there via golf cart for another small donation to Child.org and having the group mock me merrily for doing so (apparently that’s for the really old? Oops). Also once again being pleased with the toilet situation at Latitude. Now I don’t want to overshare here, but my biggest fear of these sorts of things is having to crap on someone else’s crap. I strongly believe if you ever do this, you need to take a long hard look at yourself and review some life choices. So its always nice to see a well-maintained long-drop and/or tidy portaloos. Well done Latitude. If there was a comfy pooping award, I would nominate you for sure!

And on that less than delightful note… Until the next time folks. Pliny out!

Oh, and yesterdays blogging left me with diagonally sunburnt knees. Note to self: don’t blog cross-legged.

Bugger. Also, as another side note; big up to all the young entrepreneurs who scour the areas with plastic bags collecting plastic bottles. For context, Greenpeace operates a policy here of ten pence back for every bottle you return rather than just throw away. This leads to gangs of well-behaved 6-11-year-olds roaming the land, taking bottles (cash) from those too lazy to get off their arses and return them. People like me and my friends! Lol.

At Guilty Pleasures, I spotted Jonathan Pearce and insisted on a picture with him.  Like a true professional he stopped and smiled for the photo.  But I could see in his eyes the look of ‘Oh Christ, can I go nowhere for some fun and chill time’.  Jonathan, in the exceedingly unlikely event that you ever see this, I can only apologise for the fat lump of booze-filled oik, that accosted you that night.  I hope you got over it quickly and the trauma wasn’t too great. For those of you that don’t know, Jonathan is like a living God to me.  A football commentator that started out (from my memory at least) on Capital Gold 1548AM, back when I was a teenager.  Boy, can he commentate.  Even on the wireless, the way this man conjures up an image is magical.  I’m gushing now, so I’ll stop.  If only for decencies sake.