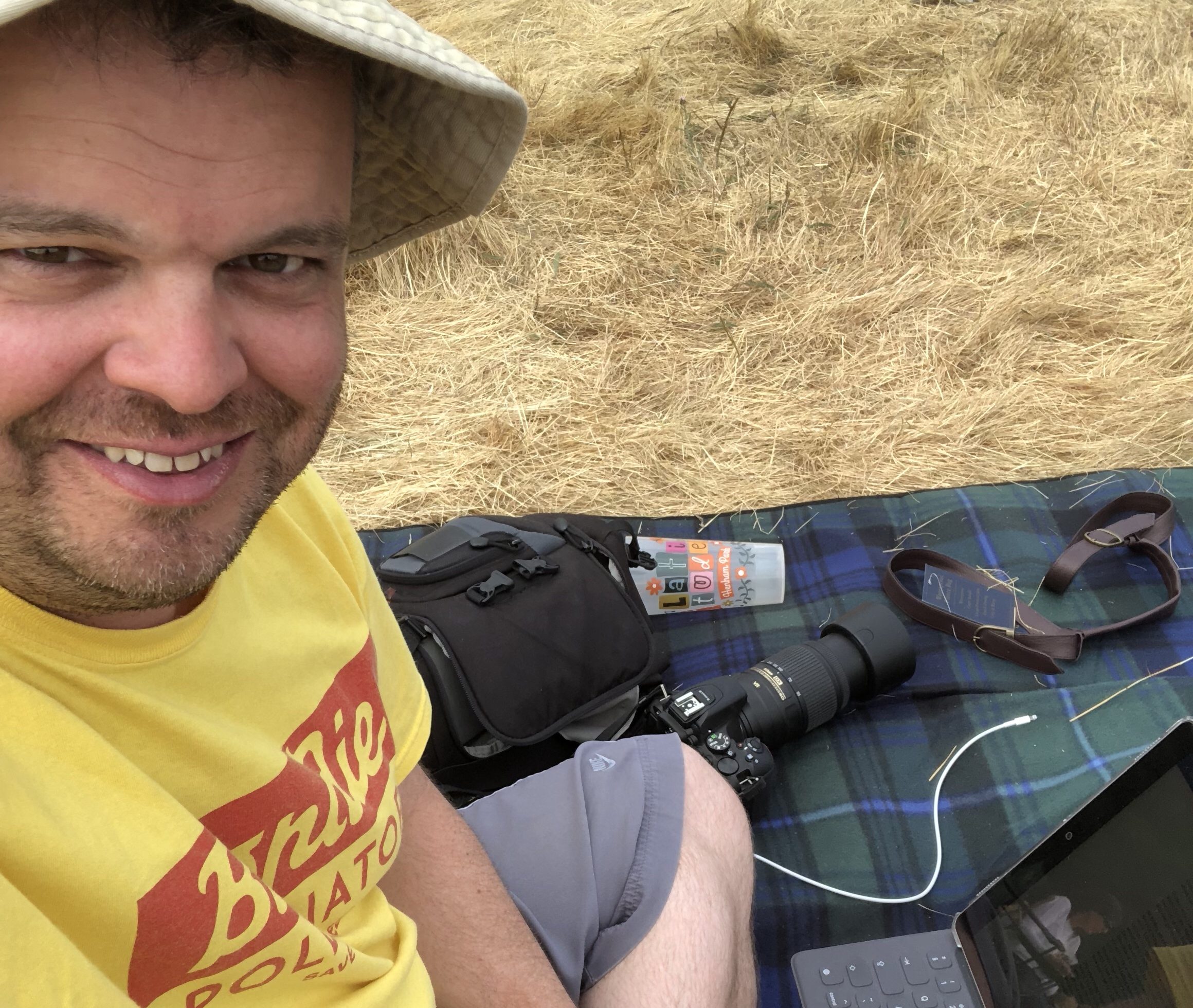 So here I am again folks. Much later than expected or even hoped on my part, but here nonetheless to fill a few minutes of your time with my thoughts. Drivel or gold; you decide.

I’m here because I’ve found time to be. I’m at Latitude, a music (and arts (and more recently, food!)) festival in Suffolk, England. It’s currently a Friday, but it’ll be much later in the week or following week(s) before this reaches your eyes, as there is literally no signal that I can find that will allow me to post this.

I’m in the main Arena between the early acts, as the sound-folk and roadies prepare their stage for the next act after having watched The Go! Team, I thought I’d write a little about what’s been happening recently and about this blogging lark in general. It’s likely a long post, on account of my verbal handbrake being utterly shocking and my propensity to waffle being my dominant gene, so settle in, grab a cuppa and – hopefully – enjoy! I test read this in about six minutes, for your information and convenience ;).

Blogging is hard. Isn’t it?

Well yes and no. I enjoy it. I really enjoy it. I like getting my thoughts out of my head and on to whatever the blog equivalent of paper is and I really enjoy some of the comments I receive here, on Twitter, Facebook etc from those of you that read my efforts. I enjoy the process of writing because I have no real process. I get the time, so I sit and write. I had no idea I was going to type that sentence and at this point in time, I have no clue what the next sentence will be either. So bollocks to process and hurrah for free-form offloading or something. That being said, I will follow some steps before you get too see this online. I’ll re-read it, obviously, correct spellings, find better words to use, eliminate repetition (originally that said repeated words, by way of example), where they disturb what I think is the flow and then do a thorough search through the blog to try to address my obsession with overusing exclamation marks!!! << thus. Then I’ll re-jig the odd paragraph, add in some links and images and do all the other things that make it a blog post and not just the weird ramblings of a forty-three-year-old tubster in a field.

When I had the first inkling to start this blog, I was employed in a role for a large facilities management company that was mentally challenging (in a good way), but allowed a fair deal of work-life balance and for the first time in my life I began to realise that there was more to life than work. I discovered Periscope and a whacky but wonderful community of people all around the world and I began making friends in all sorts of places, some of which I have blogged about previously. Then, around Christmas time I lost my job. That is to say, the funding for the project I was managing was eliminated in a restructuring and I was paid out, rather than the company having to endure the protracted costs of taking me through a redundancy exercise. An offer was made; a good offer; and I took the money and planned to relax for a few months.

I had a great time: Trips abroad, interesting things to do in the UK and finally some time to learn a bit about blogging, WordPress etc and dive deeper into the social media world. I even started a quiz on periscope (Shameless plug: Friday nights between midnight and 02:00 GMT, usually for about an hour). I was thinking about taking it seriously and maybe even trying to make it ‘what I do’. Still might.

That said, a mortgage meant that I couldn’t be unemployed forever and as the cash dwindled I started looking for work. I got lucky and found the job I’m in now which started in late May, I think. It’s an interim role, managing the team of facilities management operatives at a factory for a large pharmaceutical company. It’s four months work, now extended to six, whilst they find the person they want to fill the role permanently. This will not be me, by choice. The role isn’t really for me and I think my skills would be better deployed in some other way, but it’s nice to be able to find work through a network of people and, in a way, feel valued as a result.

Anyhoo, the point is that this role is exceptionally busy, for a variety of reasons that I won’t go into here, principally because I’ll bore the hair off of you if I do, but also out of respect for both the company I work for and the client company. Don’t read anything into that. It’s just that some things should remain confidential. There’s probably something in my contract about that, but I’m not the contract reading type.

Because of the busyness of the role and the busyness of my life, the fun stuff has suffered. It’s been several weeks since I was able to do the quiz and I don’t know how many months since I last wrote to you, dear reader. Soz. I’ll be getting back on the quiz the week I return from this festival, energy and time permitting. See you there? See you there!!

Consistent only in my absence, this is frustrating. Frustrating for me, at least. Dunno about you. Let me know below.

So ideas wise, I have loads of plans. I could blog about this festival. Probably will whilst I’m here. Should probably also update you on my recent trip to the US, where I met loads of folks, had a great time and owe a great many people a formal thank you. Will defo get on that! Eventually.

So finding time to blog is hard. I’m working a sixty hour week, taking holidays and sleeping as much as possible at the weekends just to feel like I can function in the week. I should probably do something about that. But what? I don’t drink that much caffeine and I don’t want to either. I stopped that about four years ago, having been something of a coffee fiend for years. An average day would be three or four large lattes, six cans of full-fat coke and my three o’clock espresso with Yorkie bar (UK chocolate, if it’s not elsewhere in the world?). Hardly healthy but it kept me going and I thought I was awake and doing what I needed to, to further me my career. It wasn’t until I started falling asleep whilst driving on motorways that I wondered if I was actually tired or just having caffeine crashes. So I stopped; cold turkey. It was bloody awful. I had the shakes, headaches and had to have three or four days off work at the time just to get to a normal state. Turns out I was just knackered. Anyway, I digress.

The other thing I find hard is my propensity for perfectionism. Now don’t get me wrong, I’m not saying this dross is perfect. Not at all. But it’s as perfect as I could get it given that I’m in a field half watching Gang of Youths and being distracted by all the stuff that comes with a festival crowd. No. What I mean is that I want it to read well, but also want it to not be just text. So now in my mind, I’m wondering what images I should use. I’ll find out shortly before you do, as the images are usually the last things I add.

It’s a ball ache. It really is. It hard to let something go public if I think it’s not the best I could do. I’m obsessed with spell checking this thing and that takes time. So this forms another excuse for not starting in the first place. I won’t have the time, will I?

Regardless here I am. Typing. Aimlessly. But with some purpose. That is to say, I want to solicit your views. Let me know below if you do this sort of thing. What do you do to make the time to blog? How do you balance this with the world IRL, as they say? How do you make sure you don’t get stuck in procrastination mode, making excuses like, it’s not good enough yet? I’d love to hear. I honestly would.

Also, it’ll give me an idea of who managed to get through this to this last paragraph. Give yourself a round of applause if you did. Bravo, you!!

In the meantime, I’ll work up a couple of festival posts and a holiday blog too.

Now. Where are those blog suitable images?