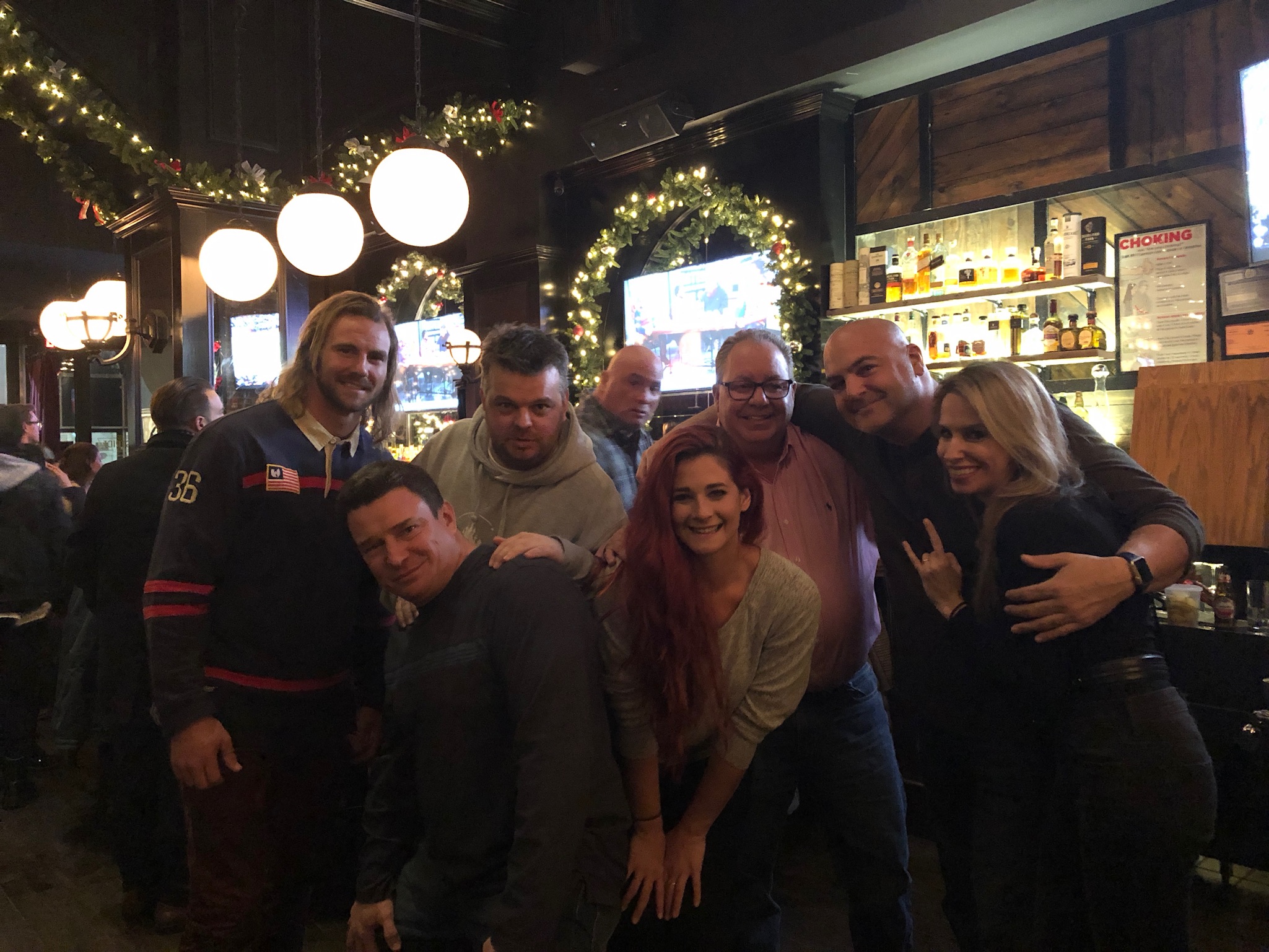 So a little update on the surprise visit to NYC.

Following cheesy foot-gate and yummy cheesecake-gate (see previous post), I took a small rest to key up the last blog post and then set out to surprise Brandee Anthony at her peri meet up in the District Social in Manhattan.

Dressed up against the cold I used my coat as a screen to sneak up on Brandee and tapped her on the shoulder, my face well hidden by the collar and head covered with a hat.  In hindsight I should have tried to look less like a mugger.  I only wish I’d thought to wear some sort of body cam, to record the mixture of fear, confusion and shock.  I also hope that just arriving out of the blue wasn’t overly rude, although to be fair it was an open invite…

Me: revealing face from behind collar, “Hello”

Brandee: “…” followed by odd looks around at other people, “What are you doing here?”

Brandee: “But what are you doing here?”

And so it went on for a few minutes, me desperately trying to think of new ways to say ‘I’ve Come for a beer’, whilst hoping I hadn’t sent her into shock or something.  Thankfully, all was clearly explained in short order and so the hello hugs and introductions began in earnest.

What a fantastic bunch of people there were assembled too.  Big thanks to Jimmy Nap for helping me spring the surprise and keeping it quiet from Brandee: Top fella.  Also introduced to Zeke, an exceedingly cool dude indeed.  Then there was Bob Chapman and Angels Piano there too, both of whose scopes I have watched and been regularly entertained by.

Weird thing was (and I say weird in the nicest sort of way), although I didn’t know any of these people (Brandee excluded) at all prior to turning up at the bar, the scope persona of each of them meant that we didn’t feel like strangers, at least not to me, and it was very easy to slip into general chit chat with everyone, like I’d known them for a while.

Also, the booze may have helped.

And boy did we booze.  We boozed solidly until about 10:30, when Bobby McNasty turned up too.  Did that mean we stopped.  Hell no.  On we boozed. And on. And on. Basically we beer’d shots’d and laughed until we could no more.  Literally.  The bar closed and we were politely told to leave.

Goodbyes were said, hugs exchanged and I wandered off in to the snow with the warm glow of new friends made.

So I started writing this in the departure lounge of JFK, but due to it having the worst WiFi in the world I’m finishing it from home.

The journey back to the hotel was made longer by the fact that I was zig zagging down the street and not 100% sure where I was going.  But I did stop off at a burger place in Canal Street where I met two interesting folk who play in bands, whilst drunkenly discussing Brexit and Trump.

The bands were Beau and Maybird and can both be found on Spotify.

Check ‘em out and give then some support why don’t ya‽  I have and they are really very good.

I’m aware that you might be reading this saying ‘of course they are Pliny’, they’re bloody famous.  Built I’m ignorant of that and they were great people who make great music.  Hopefully I’ll see them touring in the UK soon‽  Fingers crossed.

So, a late night and a small hangover meant a lie in and a late start. Conscious, as I was, that I needed to be at JFK to catch a plane that wouldn’t wait, I wondered what I could do.

A jaunt to Times Square to try out the Insta 360 One was on my list and I gave that a go with some success, although I’ll need more practise with the camera to really master their bullet function (again I’ll add these pics to another post).  I also took the opportunity to grab some lunch in an Irish pub just off the square whilst I watched my beloved Tottenham Hotspur get pasted 4-1 by Man City, who have surely already won the league, even at the half way stage‽ Still, you can’t have everything I guess and I still think we’ll end up having a reasonable season.

Then off to Strawberry Fields, as I know Vegan Doe would likely want to have a gander, given the chance, and I felt like doing a little scoping.  So you can check out the scope from near the Dakota Building and a small stroll around Central Park, if you are so inclined here.

Then a dash to JFK, which took longer than planned because I went the native way instead of a yellow cab from central Manhattan and tried to use the subway and the AirTrain.  Got hopelessly confused when there were delays on the subway line I needed and just about made the airport with an hour and a bit to take off.  Fortunately this was a hand luggage only trip, so check in was eased!  So I started this post in the bar at the airport whilst waiting for the plane, and I’m happy to report it was a good flight, having snaffled an upgrade to Upper Class for the journey home, by pure luck.  The cherry on the cake of a great weekend.

I’ll leave this here, because I feel myself descending into waffle mode.  Will post pics shortly!!